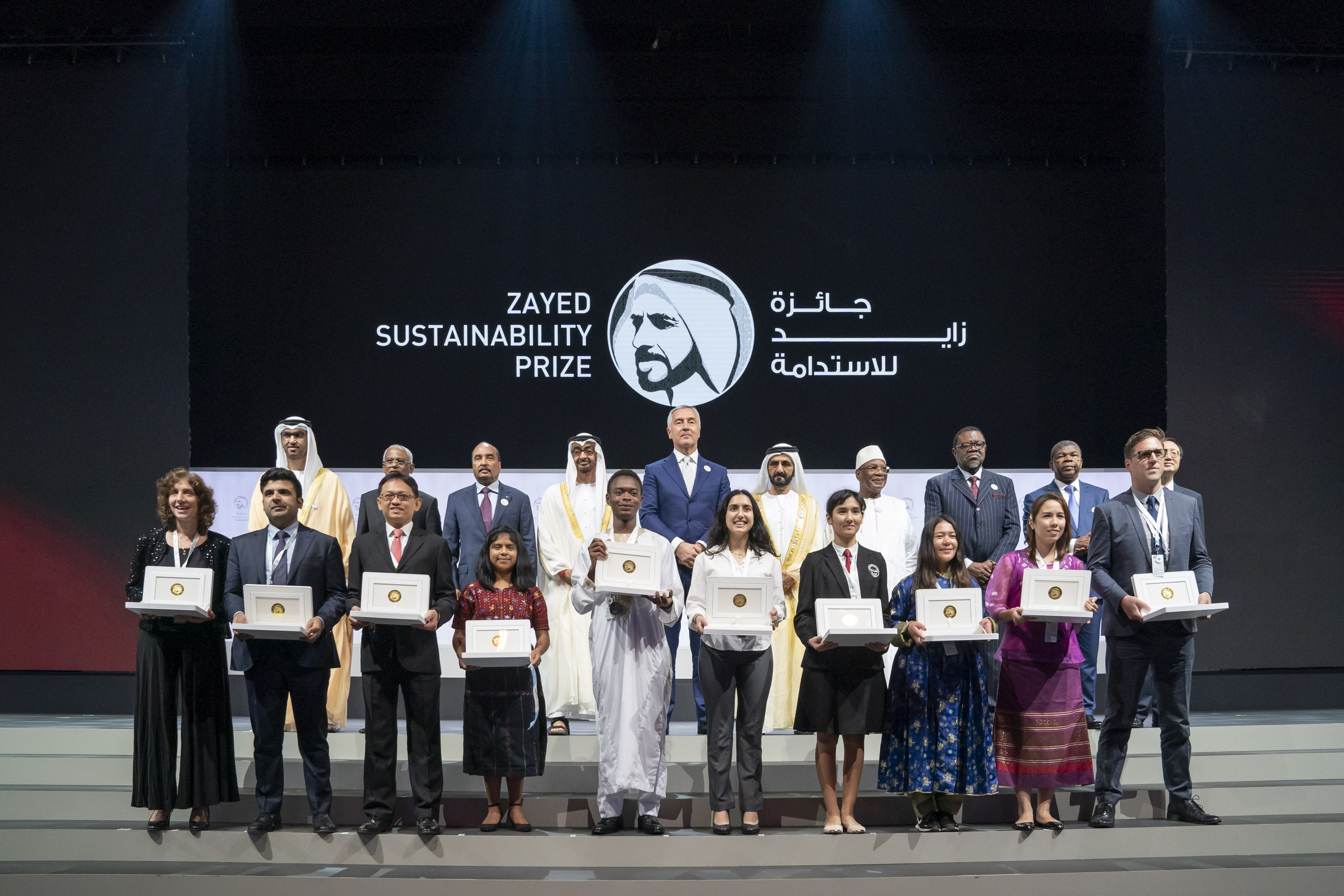 Sheikh Mohamed bin Zayed congratulated the winners and praised their efforts and valuable contribution to support sustainable development. He encouraged them to keep up the good work to find innovative and sustainable solutions to address current and future global challenges.

He also praised their creative ideas and efforts that have contributed to the economic and social development of their countries and regions.

"This year’s awards mark a significant milestone in the history of the prize and the UAE. Throughout 2018, we saw the nation unite in commemoration of the UAE’s Founding Father, with the Year of Zayed. The celebrations inspired the prize’s evolution to recognise a wider scope of globally impactful solutions to address the world’s sustainability challenges.

Under the leadership of President His Highness Sheikh Khalifa bin Zayed Al Nahyan, the legacy of Sheikh Zayed’s values continues to shape our global vision for development that is sustainable and inclusive, which we will celebrate throughout 2019 as the 'Year of Tolerance'," he added.

"By identifying work across sectors that are the cornerstones to the UN Sustainable Development Goals, the prize presents an unparalleled global platform for ideas that have the power to benefit humankind and our planet. Through the wider impact created in the areas of healthcare, food security, energy access, as well as water and sanitation, we are uniquely positioned to embolden and empower a new generation of pioneers to create exciting innovations that will change the lives of millions of underprivileged people around the world," His Highness added.

Sheikh Mohamed handed the prizes to 10 winners across the categories of Health, Food, Energy, Water and Global High Schools, which was held within Abu Dhabi Sustainability Week, ADSW.

The 2019 Prize honoured leaders whose work and spirit of enterprise has resulted in working solutions across communities around the world.

The format of the Prize invites organisations including small and medium-sized enterprises and non-profits to submit existing solutions that have already demonstrated a positive impact. The Global High Schools category seeks to inspire young minds and encourage entries based on concepts or proposed projects they can implement with the award’s prize money.

In the Health category, 'We Care Solar' received the award for its Solar Suitcase, a portable maternity device to assist with childbirth and related medical services in off-grid rural areas. The unit brings together light, fetal monitoring and communications equipment and has already helped 1.8 million people by assisting doctors, midwives and medical professionals by providing emergency obstetric care across 3,325 health facilities in 27 African countries.

Sanku, the winner in the Food category, was recognised for its flour fortification machines that equip and incentivise small-scale, local millers to fortify their flour with nutrients using innovative technology. Sanku has currently installed 150 fortification machines in flourmills across five East African countries, impacting the lives of almost one million people daily by providing them safer and healthier food sources.

In the Prize’s Energy category, BBOXX, an energy solutions provider, was recognised for its plug-and-play solar device, offering users an on-grid experience in an off-grid setting. BBOXX has installed over 160,000 solar home systems across Africa, South America and the Pacific region, connecting over 675,000 people with clean, affordable energy solutions, and offsetting an approximate 87,000 tonnes of CO2 each year.

ECOSOFTT, the winner in the Water category, was awarded for its decentralised community water management standard, which outlines a set of solutions for source management, water use, water recycling and discharge. It has implemented over 50 projects in five countries and provided more than 200,000 people access to clean water, sanitation and hygiene.

The Global High Schools category, which was introduced in 2012, expanded this year from five to six schools, with each representing a specific world region. Participating schools submitted a project proposal that addressed one or more of the four sustainability challenges: Health, Food, Energy or Water.

Chair of the Zayed Sustainability Prize Jury and former President of Iceland Olafur Ragnar Grimsson, said, "I would like to thank the UAE leadership for their foresight, 10 years ago, in establishing such an award. Through their commitment to its ideals and goals, the Zayed Sustainability Prize’s new and broadened mandate facilitates a continuation of its reach, while transforming the lives of vulnerable communities across the world.

The Prize is a significant vehicle for generating support and advocacy for the global sustainability agenda and while we congratulate the 2019 Prize winners, I would also like to recognize all entrants, shortlisted candidates, and finalists – as they have all demonstrated a clear passion and dedication towards creating a more sustainable future."

In turn, Dr. Sultan bin Ahmad Sultan Al Jaber, Minister of State and Director-General of the Zayed Sustainability Prize, said, "The Zayed Sustainability Prize aligns with our Founding Father’s holistic, humanitarian vision and will build on the positive impact of the precursor, the Zayed Future Energy Prize. The Prize’s evolution and the expansion of the categories has resulted in record interest and we are particularly energised by the extraordinary work, passion and innovation taking place around the world to identify the most impactful solutions to global challenges."

He continued, "We congratulate the winners of the 2019 Zayed Sustainability Prize. The Prize’s success relies on a collaboration between all stakeholders – from governments and industry to the ingenuity and inventiveness at the grassroots. We continue to be inspired by their creativity and enthusiasm as they pursue sustainability-led solutions to achieving the global goals."

Since awarding the prize for the first time in 2009, its winners have had a direct and indirect impact on the lives of more than 307 million people around the world and have been able to contribute significantly towards reducing carbon dioxide emissions to 1 billion tons. They have also saved 1.2 billion megawatts of clean energy, while expanding access to energy to 27.5 million people in some of the poorest communities in Africa and Asia.

Established by the UAE leadership, in 2008, as the Zayed Future Energy Prize, the Zayed Sustainability Prize is a global award inspired by the sustainability legacy of the UAE’s founding father, the late Sheikh Zayed bin Sultan Al Nahyan.

Culminating in an annual awards ceremony, held each year during Abu Dhabi Sustainability Week, the Zayed Sustainability Prize invites pioneers from around the world to be part of a growing community of innovators, committed to developing impactful sustainability solutions and accelerating the development of projects that serve people across the world and for future generations to come.