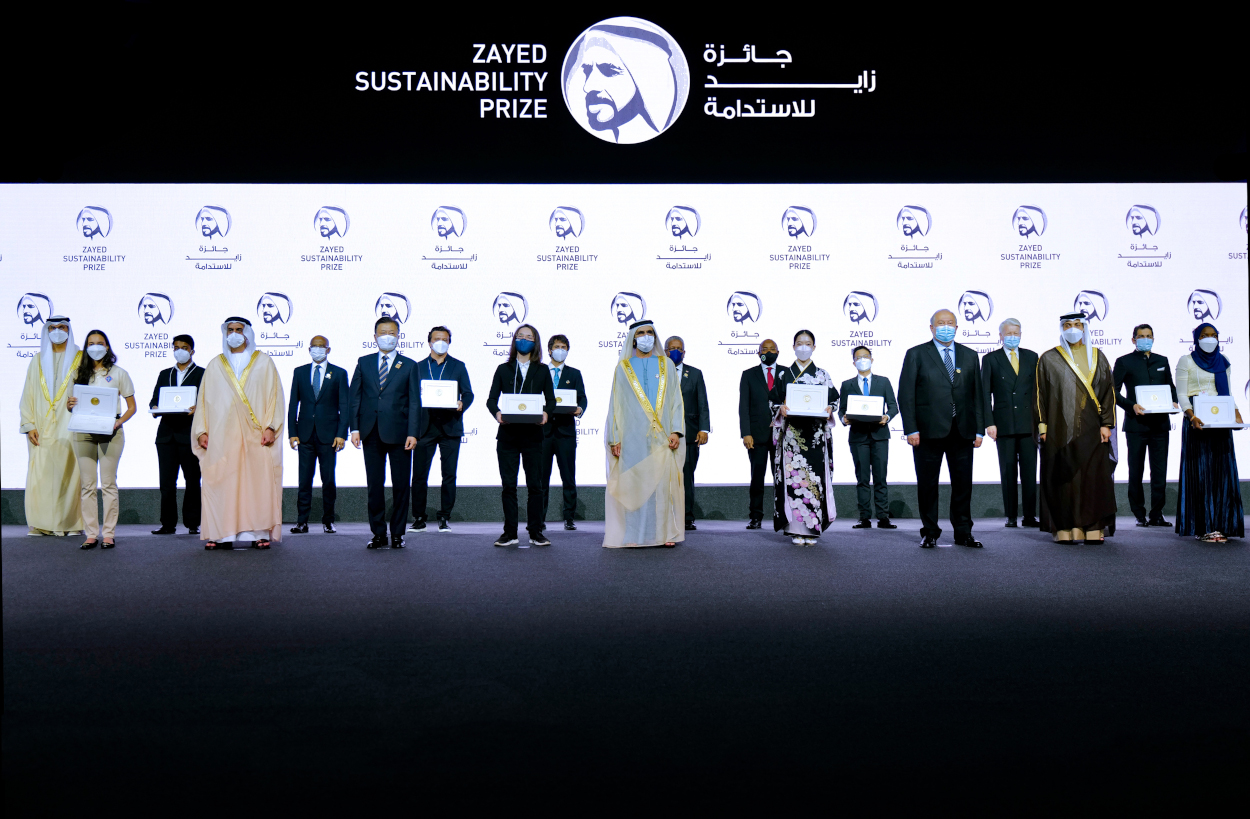 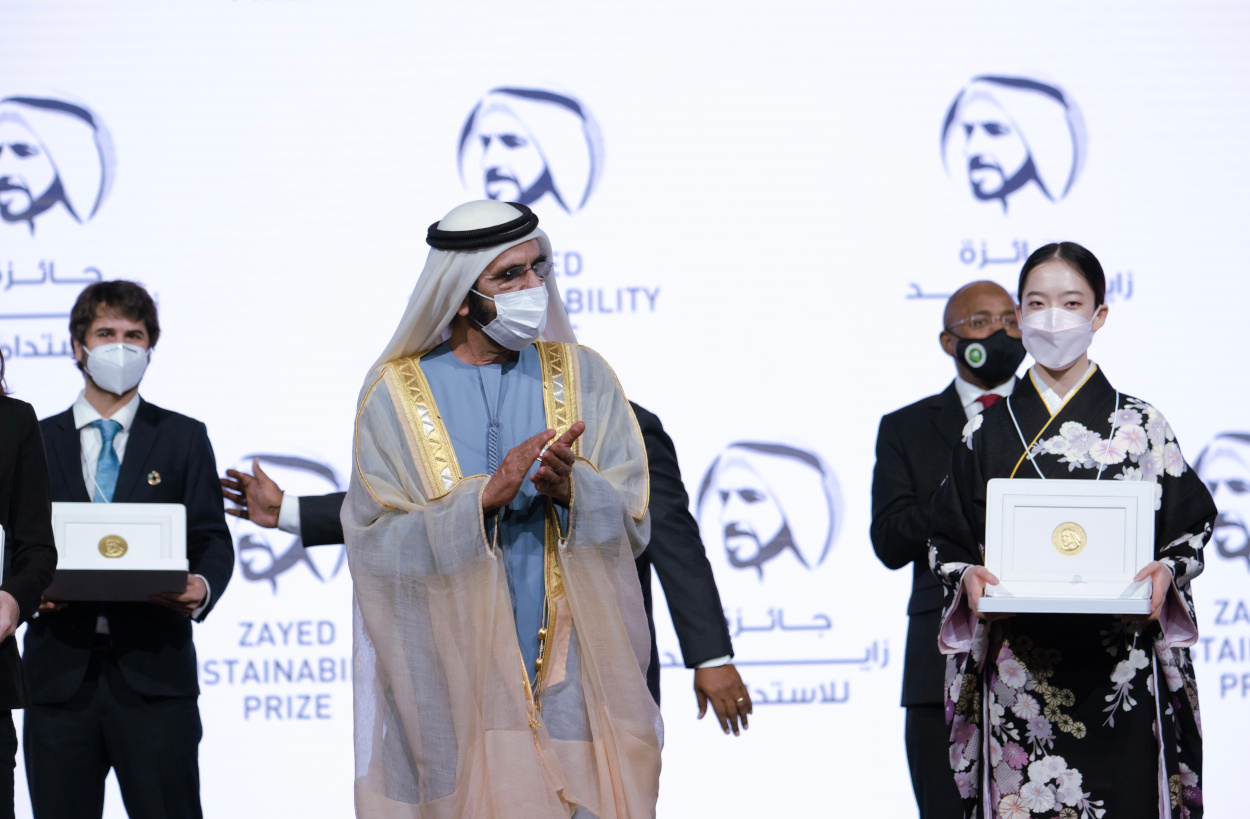 His Highness Sheikh Mohammed bin Rashid Al Maktoum congratulated winners across the five categories reaffirming the Prize’s key role in realising the aspirations of participants to achieve sustainable development within their communities.

This year, the Zayed Sustainability Prize, along with ADSW, joined forces with Expo 2020 Dubai for hosting the ADSW Opening Ceremony and the 13th edition of the Prize’s Awards Ceremony, both of which took place on the morning of Monday, 17th January at the Dubai Exhibition Centre. The event brought thousands of attendees and more than 600 VIPs from around the world together, including heads of state, government ministers, industry leaders and country ambassadors, amongst others.

In his remarks on the Awards Ceremony, His Highness Sheikh Mohammed bin Rashid Al Maktoum, said: “The UAE continues to make important strides and contributions to advancing the global sustainability agenda to stimulate economic and human sustainable development, under the leadership of President His Highness Sheikh Khalifa bin Zayed Al Nahyan. The Zayed Sustainability Prize remains at the forefront of these efforts as it continues to set the course for alleviating hardships and improving lives by rewarding impact and innovation through a platform that can reach a much larger number of beneficiaries.”

His Highness Sheikh Mohammed bin Rashid highlighted the support, involvement and directives of His Highness Sheikh Mohamed bin Zayed Al Nahyan, Crown Prince of Abu Dhabi and Deputy Supreme Commander of the UAE Armed Forces, while underscoring how the hosting of the Awards Ceremony at Expo 2020 Dubai coupled with the recent announcement of the Principles of the 50, which marked the UAE’s Golden Jubilee last month, provide an optimal backdrop to this year’s awards, as all these national efforts share one single goal – to create a more sustainable future for all.”

His Highness continued: “Over the last 14 years, the wise and long-term vision and legacy of the UAE’s Founding Father, Sheikh Zayed, has ignited the passions of millions of sustainability pioneers the world over, inspiring us to take the Prize to new heights by strengthening and diversifying its offerings to become the all-encompassing award it is today.”

The US$3 million Prize is the UAE’s pioneering sustainability award that recognises small to medium-sized enterprises (SMEs), non-profit organisations (NPOs), and global high schools for their innovative, impactful, and inspirational sustainability and humanitarian solutions. Through its 86 former winners, the Prize has transformed the lives of more than 370 million people, across 150 countries, since 2008. In the Health, Food, Energy, and Water categories, each winner receives USD 600,000, while the Global High Schools category has six winners, representing six world regions, with each winner receiving up to USD 100,000.

In terms of the Global High School category, His Highness highlighted the importance of strengthening the youth’s capacity as a driving force for future sustainable development to shape tomorrow’s leaders and effectively empower them to play a larger role in advancing their impact on socio-cultural and economic development, in a rapidly changing world.

On a broader level, His Highness also praised the level of foresight and sophistication that many of the student-led proposals displayed, noting their potential impact on an individual, community and global level.

In the ‘Health’ Category, Argentina’s Mamotest was awarded the Prize for its efforts to increase access to diagnoses and life-saving services in tele-radiology and remote analysis. Mamotest is currently deploying centres that are providing 582,697 beneficiaries affected by breast cancer access to quality healthcare, with plans to scale this to over 1 million people over a period of five years. Mamotest also enjoys robust patient-journey follow up as 87% of women diagnosed within their system could receive lifesaving treatment on time. Furthermore, Mamotest has successfully carried out more than 5,000 diagnoses to date while creating awareness in millions of women.

S4S Technologies from India was the ‘Food’ category winner for its important work in food preservation and dehydration systems. They currently directly impact 35,820 people and the SME plans to scale this to 10 million individuals over the course of five years.

The organisation is committed to empowering rural women and harnessing new technology to reduce food waste and improve income for farmers and is deploying solar-powered technology to help women farmers increase their earnings. As part of its commitment to supporting Gender Equality, backed by economic opportunities, S4S Technologies has provided additional income to 455 women farmers turned micro-entrepreneurs, increasing their profit between 50 to 200%, annually.

In the Energy category, the Bangladesh-based SOLshare created an interconnected microgrid for peer-to-peer energy exchange networks to enable more efficient distribution of electricity across rural communities in the country. The organisation won the 2022 award for its efforts in energy management as it currently benefits a total of 35, 300 people with plans to expand reach to 2 million people in the next five years.

SOLshare is providing more than 1,000 households with access to over 85 MWh of additional clean energy and serves approximately 500 entrepreneurs within their grids, of which 25% are women who experience significant income rises as a result.

Wateroam, an SME from Singapore, secured the ‘Water’ category win for its commitment to tackling the global challenge of contaminated water through portable water filters to serve disaster-hit and rural communities. Wateraom’s safe drinking water solutions are benefitting more than 150,000 people across 38 countries globally with daily access to clean drinking water and has plans to expand its reach to 1 million people over a period of five years.

The Chair of the Jury and former President of the Republic of Iceland, Ólafur Ragnar Grímsson, said: “The level of creativity, vision and potential scale outlined by this year’s winners has been truly remarkable and uplifting as the sustainability world looks to the future through a more challenging, yet determined prism. We are confident that all these winners will set the cornerstones for future economic growth and prosperity for vulnerable communities, within and beyond their borders, while also significantly contributing to key United Nations Sustainable Development Goals.”

Dr. Sultan Ahmed Al Jaber, UAE Minister of Industry and Advanced Technology and Director General of the Zayed Sustainability Prize said: “Following the guidance of the UAE’s wise leadership and the enduring legacy of the late Sheikh Zayed, the Prize continues to deliver real, meaningful, and long-term impact to numerous communities around the world. This has earned the Prize a global reputation as a catalyst for change for over a decade, as it has to date, benefited the lives of more than 370 million people.”

H.E Al Jaber added, “The hosting of the Zayed Sustainability Prize Awards Ceremony along with the opening of ADSW at Expo 2020 Dubai reinforces the UAE’s commitment to sustainable and humanitarian development, which characterises the country’s progressive, inclusive model for economic growth.”

“Thanks to our current roster of 96 winners and their shared commitment to building a better world, communities who were living in the dark have been illuminated through essential solar lighting, millions of children are accessing safe drinking water, hunger and malnutrition are being combatted through sustainable food solutions, and access to life-saving healthcare in remote parts of the world is being optimised.”

The Prize’s Director General concluded his remarks by underscoring the amplified impact and geographic reach that the Prize has achieved through the UAE-driven ‘Beyond2020’ humanitarian initiative. Beyond2020 has been donating critical sustainability solutions developed by past winners and finalists to vulnerable communities in various parts of the world, and in cooperation with several leading Emirati and international partners.

In the Global High Schools category, six schools, each representing a world region, receive an award and high schools submit project proposals to build or augment a solution they developed for their school or local community. The objective of this category, introduced to the Prize in 2012, is to inspire the young people to become pioneers, innovators and sustainability advocates who will contribute to a more sustainable future. 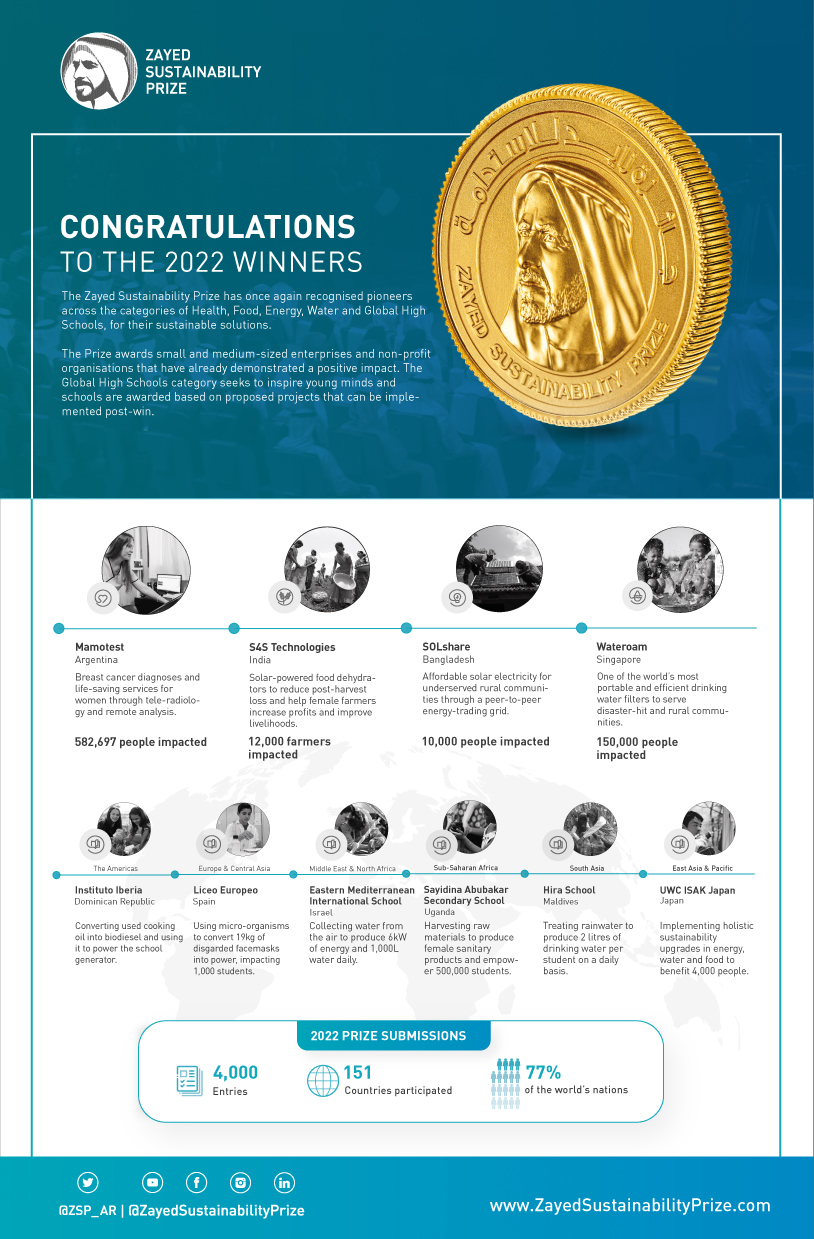