"We pay the utmost care and attention to our environment for it is an integral part of the country, our history and our heritage. Our forefathers and our ancestors lived in this land and coexisted with its environment, on land and at sea, and instinctively realised the need to preserve it."
Sheikh Zayed Bin Sultan Al Nahyan 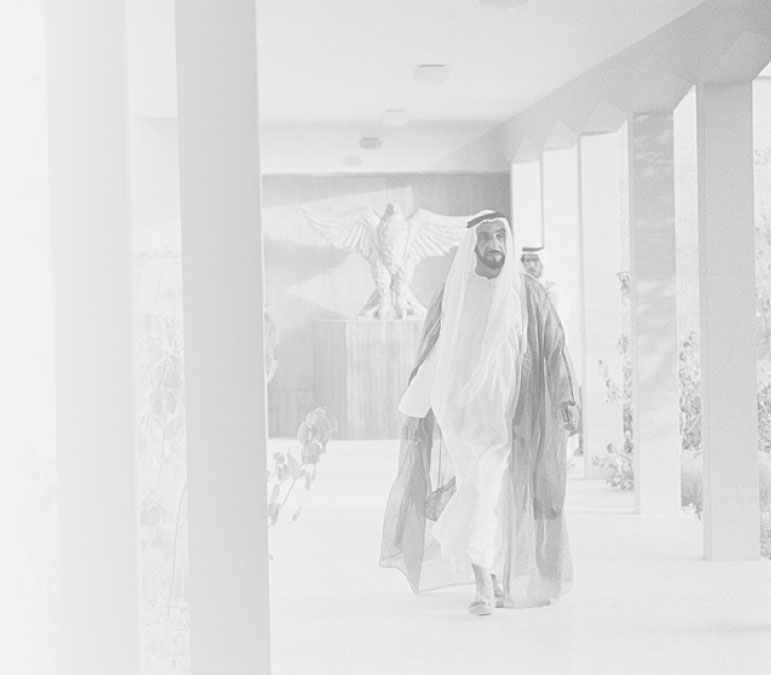 On 2nd November 2004, Sheikh Zayed bin Sultan Al Nahyan, President of the United Arab Emirates and Ruler of the Emirate of Abu Dhabi, passed away. For Emiratis and residents of the UAE, Sheikh Zayed was not merely a national leader, he was a man of great vision and someone who transcended national borders and cultures as a true statesman, widely respected the world over.

In a journey he began over 40years ago, Sheikh Zayed came to embody the values of tolerance, unity and the spirit of a nation – a legacy now infused and represented by the responsibility, camaraderie and collaboration seen among all Emiratis and residents of the UAE.

Sheikh Zayed’s vision was driven by a passionate belief in leading by example and this was a key essence behind his progressive socio-economic, sustainable development and humanitarian vision.

Drawing on the valuable lessons of the past, while embracing progress, Sheikh Zayed placed great value in the importance of pursuing development in line with both the needs of present and future generations.

During his lifetime, Sheikh Zayed bin Sultan Al Nahyan's vision was such that it became a legacy ensuring the long-term sustainable development of the UAE.

Sheikh Zayed placed great emphasis on education and individual and social empowerment. This included addressing the welfare of the less fortunate – in both the UAE and for others around the world. He was also a tireless advocate of protecting the heritage of the land, supporting and overseeing  the implementation of a series of measures to protect the natural world and its resources.

Some key examples of Sheikh Zayed’s action in these areas include his creation of official institutions such as the UAE’s Federal Environment Agency and Abu Dhabi's Environmental Research and Wildlife Development Agency. Acknowledging the responsibility that governments must assume in conserving the natural world, he also called upon individuals to play their role in ensuring sustainable development.

With all of these attributes considered, it is no surprise that Sheikh Zayed’s vision – and now legacy – is an enduring reminder of his astute foresight and wise leadership - attributes that will continue to shape the sustainable development agenda of the UAE as well as other countries around the world, for many future generations to come.

The Zayed Sustainability Prize is honoured to have been formed as an organisation that acts as a custodian of this legacy. Inspired, every day, by Sheikh Zayed's principles and approaches to global sustainability, the Prize proudly carries forward and shares this vision with an an ever-increasing number of people and organisations worldwide.